All About Ferrite Chokes

You might have noticed that some of the cables connecting the peripherals to a personal computer have some strange looking bumps….. 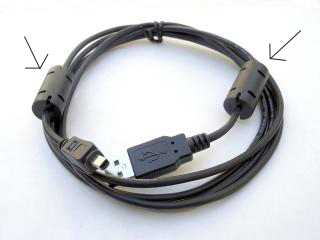 So, what exactly are these things and what do they have to do with intercom?

These “bumps” are called chokes, or inductors with high reactants in certain frequencies of the electromagnetic spectrum. In this particular application, they are mostly referred to as ferrite chokes. They consist of a cylinder made of a semi-magnetic material called ferrite that is slipped over the cable during the fabrication process. Ferrite is generally brittle and can easily break when subjected to physical shock. Because of this, and for basic aesthetic reasons, the cylinder is usually encased in plastic.

Ferrite chokes have the role of reducing electromagnetic interferences produced or received by a particular electronic device. During operation they depend on a property known as self-inductance; i.e. isolating the alternating component of the electric current while direct current signals are allowed to pass through the cable without restrictions.

As you probably know already, during operation, a personal computer generates several electrical signals with frequencies ranging for 300 to 1,000MHz. These can easily produce radio signals at the respective frequency, which could affect your intercom or whatever is attached to that particular wire (remote transceiver, antenna, etc.). Because the different cables connecting to the computer basically act as antennae, the produced radio waves could potentially be broadcast into the surrounding medium, where they interfere with the correct operation of other electronic devices.

Ferrite chokes help prevent this issue. As an alternating component passes through the cable, it will eventually encounter the choke, where the magnetic field produced by the flowing current induces a magnetic flux in the ferrite material. This, in turn, generates an electromagnetic force opposite to the charge of the current. This basically “chokes” the radio frequencies and prevents them form escaping into the medium.