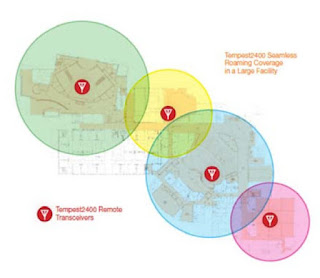 Multi‐level and Multi‐venue Church
Challenge:
A mega church required a wireless system that could be used for communication throughout its 5‐venue, 2‐level facility.

Solution: A Tempest BaseStation with the Seamless Roaming feature and remote antenna were placed near the sound and video booth in the main amphitheater. A remote antenna was mounted on the side
of a camera and was nearly in the center of the auditorium. The setup was quick. The system immediately covered the large area inside the theatre and also outside the long corridor. Two additional BaseStations were placed in other strategic locations and created coverage zones for both levels of the entire facility. The system worked flawlessly.