While everyone agrees that networking audio products to create flexible workflow infrastructures is indeed the best way to distribute and leverage the multiple signals used for a video production or broadcast facility going forward, there’s a bit of a debate about the most efficient way to do it. We see and hear a lot of acronyms and fancy names thrown around when it comes to networking, that is, sending audio signals over an Internet Protocol network (AoIP), but what’s it all mean?

The two major competing formats – Dante (Digital Audio Network Through Ethernet, a proprietary but widely accepted protocol from Australia-based Audinate) and AES67 (a more open industry initiative) – similarly convert audio signals to IP and enable complete flexibility in where audio equipment can be located and how signals travel around a facility or live production. Yet, they also have their differences. Choosing the right one has led to a bit of confusion among customers seeking to set up networks that allow individual pieces of audio equipment (microphones, mixing consoles, routers, audio processors, etc.) to communicate with each other in new and innovative ways that have not been possible before.

Many applications and proprietary networking benefit from both protocols and, interestingly, both are supported by each other in many systems cases – such as audio mixing consoles from companies like Solid State Logic and Wheatstone. And the benefits for users are potentially huge, allowing broadcasters, production studios, houses of worship and other venues to combine studios and resources as a result of IP audio networking. The flexibility of these systems makes it possible for them to change the studio from one network affiliate to another in a matter of minutes. That includes reconfiguring everything, from remote venue to mix-minus and talent mics. No longer do users have to keep dedicated studios for each show or affiliate. One, very flexible studio can serve multiple purposes.

On a practical level, IP audio is much easier to deal with and far more scalable for doing the fast-paced productions that go on in production environments these days. Mic sharing, studio swapping, and setting up IFBs are straightforward and quick, which means a good return on investment because you’re able to streamline production and reduce hardware costs in many cases.

Dante consists of software, hardware, and network protocols that deliver uncompressed, multi-channel, low-latency digital audio over a standard Ethernet network using Layer 3 IP packets. It consists of a suite of technologies: an easy to integrate Audio-over-IP networking implementation, along with well-defined developer tools and software applications. This provides manufacturers with a complete toolkit from which to build networked products, plus it gives end users everything they need to easily design, use and manage systems with audio networking.This is very different from only having a published standard, which still requires additional building blocks, which may result in very inconsistent implementations.

Dante has been licensed by approximately 350 companies, which have in turn produced more than 1,000 products incorporating the AoIP technology. Audinate produces Dante modules, chipsets and reference designs to fit virtually any type of audio product, from tiny, cost-effective single-channel devices to massive consoles with hundreds of channels. And they all work the same way, with the same tools. Dante offers, by far, the widest uptake and the most defined advanced feature-set of the current technology options. It represents a reliable, high-capacity, ultra-low latency audio network with plug-and-play discoverability, full redundancy, advanced API, and excellent value for the customer, according to the company.

Dante is also designed to work with standard network switches, allowing it to be easily integrated with existing IP infrastructure in a facility without the need for special network hardware. Interestingly, Dante also incorporates support for AES67, allowing users to connect to other audio networks without disturbing the routing or performance of the Dante network in any way. Finally, Dante Controller software provides users with audio-specific network management tools that allow them to monitor clock health and latency in real-time.

Many new products are now being introduced that natively support AES67. It is an AoIP interoperability standard, developed by the Audio Engineering Society and published in September 2013, which is intended to provide the audio transport and clocking requirements for different AoIP technologies to interchange audio. It does not strictly define how to control and manage these connections. The details of the configuring of these connections are then determined by each underlying technology, manufacturer implementation or a control system deployed that manages multiple technologies.

The AES67 standard is what’s called a “Layer 3” protocol software suite based on existing standards that is designed to allow interoperability between various IP-based audio networking topologies, like Ravenna and yes, Dante. It also identifies commonalities with Audio Video Bridge (AVB) and specifies real world AVB interoperability scenarios. AES67 is designed to ensure interoperability between previously competing AoIP systems and long-term network interoperation between systems. Since its publication, AES67 has been implemented independently by dozens of manufacturers and adopted by many broadcast and production facilities.

Ravenna is yet another audio networking technology for real-time transport of audio and other media data in IP-based networked environments. It was first introduced in September of 2010 at the IBC convention in Amsterdam and is compatible with AES67, since all relevant mechanisms, protocols and formats used for synchronization, transport and payload mandated by AES67 are fully supported. Ravenna is based on protocol levels at or above the Layer 3 protocol. All protocols and mechanisms used within Ravenna are based on widely deployed and established standards. Ravenna can operate on most existing network infrastructures using standard networking technology. Performance and capacity scale with network performance. Ravenna is designed to meet requirements for low latency, full signal transparency and high reliability.

THE CHOICE IS YOURS

So, does the audio industry have to standardize on one format? Not necessarily, according to those with experience in audio networking. 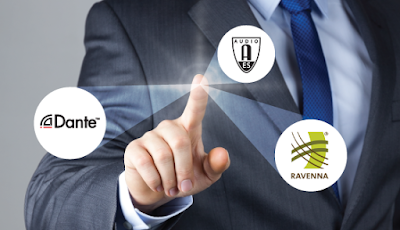 “There is space for different technologies and standards within the audio industry and it is important to recognize the difference between the two,” said Tom Knowles, Product Manager of Broadcast Systems at Solid State Logic. The company’s System T broadcast audio production environment is based around Audinate’s Dante AoIP technology and also incorporates the AES67 standard.

Today’s standard industrial IT infrastructure has already overtaken the technology of AES/EBU, MADI and TDM routers in terms of performance, cost and flexibility. Networked systems deliver huge improvements in infrastructure flexibility, better scalability, and significantly lower costs. Broadcasters and systems integrators can expect more choices in selecting interoperable equipment and solutions from a range of suppliers and will have more scope to manage and control these systems.

In the end, improved flexibility, interoperability, and features like discoverability will mean the broadcasters can adapt their systems as their own needs evolve and demands change. Freedom from expensive central routing hardware means that budgetary and inflexible infrastructure obstructions to improvements, change, and renewal are removed. Networked control allows multiple operators to share core processing power, opening up many possibilities for collaborative and multi-role production.