When trying to decide what Clear-Com wireless is right for you, how clear the audio is may determine the difference between one system or another. Today, we will discuss the audio quality section of the Choosing the Right Wireless Infographic. 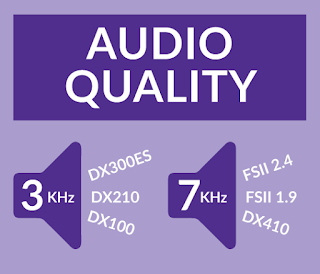 When we talk about 3KHz or 7KHz audio, we are referring to the Frequency Range of the audio. This is a generic term used by all audio manufacturers, even in consumer products. An example of frequency range would be the often-noted human hearing range of 20Hz to 20,000Hz. With Clear-Com intercoms, including the wireless offerings, we refer to a frequency range that the listener on the system would experience. With wireless intercom, it is always a beltpack.

NOTE: The specification of 3KHz or 7KHz audio has nothing to do with the RF characteristics of wireless systems.

In the beginning, telephone systems were developed for voice range frequencies so that today, you are experiencing the 3.5KHz bandwidth when you’re speaking on a telephone. This was done for many reasons, particularly because they had to transport the telephone signal hundreds of miles.

Many communication companies who are building production intercoms specify a frequency response centered on voice grade communications, just like the telephone. After all, what we are primarily doing is talking and listening to voice on the intercom – not listening to music or watching movies. Intercoms are basically a means for directions, cues, and safety within a production.

As productions got bigger, we started to see audio as an element that is present in intercoms. Audio in the form of Program; i.e. announcers and natural sounds and more full bandwidth audio programming, originated from the audio console injected into the intercoms. As users wanted a wireless system that can reproduce a broader spectrum, then that is when 7KHz audio products came on the scene. And then people realized that wider bandwidth audio, like 7KHz, was much less fatiguing to listen to. When you are subjected to wearing a headset for 12 hour tech rehearsals, listening to lower quality audio can be tiring!

The difference between 3KHz and 7KHz doesn’t mean that one is better than the other. What you have is a wider choice of products for what you need and how you are using your intercoms. The 3KHz systems are often at a lower price point and may have less interfacing features and functions, but they are ideal for all sorts of projects – from education and healthcare to small performance spaces. The 7KHz systems are typically needed for more detailed systems that are required for Broadway performances, live events and televised productions. So, the choice is really up to you!