When trying to decide what Clear-Com wireless is right for you, the frequency band regulations may effect which wireless you are allowed to use. Today, we will discuss the regional approvals section of the Choosing the Right Wireless Infographic. 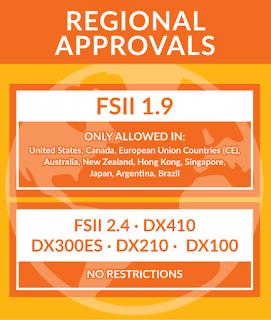 One of the first things you need to know about frequency bands is that the use of radio equipment is subject to regulations in each country. A given device may not be allowed to cause harmful interference to other authorized users. The device must accept any interference caused by other users. RF equipment must be installed by qualified professional personnel. It is the responsibility of the installer to ensure that only approved equipment and/or systems are deployed and that effective radiated power does not exceed permissible limits established by the country’s regulatory agency in which it is used.

Wireless partyline systems have been analog for many years and can still be found, although use of the radio spectrum they occupy is in a state of change. These analog wireless systems use the UHF frequencies of 470 – 698 MHz, part of which has been selected by the FCC in the US, to be auctioned off, banning the use of wireless microphones, transmitters, intercom systems or other wireless devices on a licensed and unlicensed basis. Despite the efficiency of the lower UHF band, long-term use may be in decline because of these regulation changes. But not all is lost.

One of the biggest innovations incorporated in wireless intercom is the all-digital radio. A significant feature of some digital wireless systems operating in 1.9 GHz and 2.4 GHz is that they use transceivers that require no end user licenses for operation in some countries. These systems never need frequency coordination and do not suffer from the interference that analog radio signals incur regularly. In addition, the wireless systems allow for many more simultaneous users than ever possible in the lower UHF systems.

A common transmission scheme used for digital wireless intercom is frequency hopping spread spectrum (FHSS), a technology originally developed for military guidance systems to make them insensitive to frequency jamming. FHSS-based wireless intercom systems transmit digitized audio samples for all intercom channels and beltpack return talk paths in a single transmission burst serially on a narrow band RF carrier. This is then repeated on carious frequencies in a defined pattern known by the base station and the beltpack. Depending on the implementation, FHSS may be used in conjunction with redundant transmission where a second transmission pattern is utilized in parallel, or redundant, transmission of the digitized audio on the same carrier after the primary transmission. the most recent versions also include a mechanism that validates the next frequency in the FHSS pattern before using it for transmission or moving onwards to the next frequency. Frequency bands that are commonly used for FHSS include 2400 – 2480 MHz range.

Because of these differing transmission schemes and frequency band regulations per country, the FreeSpeak II 1.9 GHz system is only allowed to be used within the United States, Canada, EU countries, Australia, New Zealand, Hong Kong, Singapore, Japan, Argentina, and Brazil. There are no current regulation restrictions for the FSII 2.4 GHz, DX410, DX300ES, DX210, or DX100 wireless systems.