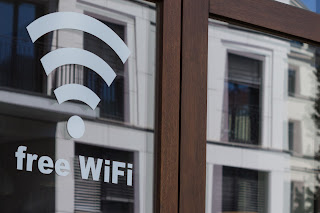 Unless you’ve spent the last few years inhabiting a cave, you’ve probably heard the term “Wi-Fi” (or maybe “WiFi”, which is an alternate spelling). It’s become one of those common “buzzword” expressions, like “cellular”, or “mobile”, or “social media”.

But just exactly how do we define Wi-Fi? We all know what its most basic use is; it allows us to connect to the Internet without having to plug a cable into whatever we’re using to connect.

What the name actually means, where it came from, and how the technology works are things that many people don’t fully understand. What we hope to achieve in this series of posts is some enlightenment on these subjects.

Wi-Fi IS NOT AN ACRONYM

The original standard for all wireless capability was developed from the Institute of Electrical and Electronics Engineers, or IEEE, and was originally published in 1999. The full-blown name for the important part of this standard is “Wireless LAN Medium Access Control (MAC) and Physical Layer (PHY) Specifications”.

As time went by, it became obvious that there were certain products that wouldn’t work with other products. Many times this was because the wireless modem in one device worked differently than the one in the device that it was trying to connect to. This was due to the face that the IEEE had no way to test different manufactures’ equipment for compliance with the standards it had published.

So, thus was created a non-profit organization called the Wireless Ethernet Compatibility Alliance. It was formed to help ensure that wireless Internet products conform to certain interoperability standards. The idea was to make certain that one company’s “box” could talk to another company’s “box”.

However, after the Alliance had been in existence for a while, a non-technical issue arose. This was that the name of both the Alliance, and the standard, were considered too long and too clumsy.

Some thought was given to using the initials, WECA, a shortened version of the Alliance’s name, but that was only part of the problem.

The bigger problem was that the standard’s name had become known as the “IEEE 802.11b Direct Sequence“. As one founding member of the Alliance commented, “We needed something a little catchier than that”. The name just didn’t have that “ring” to it to make it memorable.

So, the Alliance hired a consulting company, called Interbrand, to help them come up with something that was more memorable, and would still be descriptive enough to explain the standard, and the work that the committee was doing.

The result was the term “Wi-Fi“, and the new name for the Wireless Ethernet Compatibility Alliance became the Wi-Fi Alliance. Although some members of the Alliance were not sure that this was a good idea, since the name didn’t have a specific literal explanation, the consensus was that this satisfied all the requirements. It was easy to spell, easy to remember, and had the potential to become one of the “buzzwords” that populate our conversations today.

NOW THAT WE’VE NAMED IT, HOW DOES IT WORK?

Because of the speed, reliability, and usefulness of Wi-Fi, we sometimes forget there is a single most basic concept to it; a radio frequency signal. (If you’re familiar with the OSI computer networking model, this is the “physical layer“)

When you get on the other side of all the software, the protocols, the modulation techniques and all the other stuff involved in Wi-Fi, you can boil the whole thing down to the fact that Wi-Fi consists of a series of computer-controlled two-way radios. That might sound almost too simple, but really, within the laws of physics, that’s all there is.

Of course, some people will balk at the term “radio” and insist that non-wired data communications should be referred to as “wireless”. For right now, just keep in mind that radio waves being sent through the air from one device to another are what allows information to be transferred in a Wi-Fi environment.

Since the real purpose of Wi-Fi was to provide a way to transfer the same type of information that can be sent through a wired network, such as a 100BASE-T Ethernet network, some challenges faced the early developers.

First off, all the protocols, control codes, and other metadata that a wired network uses had to be put onto the radio signals. Also, all this information had to flow in both directions, that is, to and from each network node. When you include the data itself, this means sending and receiving a lot of information.

In a wired environment, you don’t have to constantly turn on and off the radio waves in the devices. With radio communications, this usually has to be done because two radio waves on the same frequency, at the same time, will interfere with each other.

Trouble is, this can be very time-consuming. It can slow data transfer down significantly. In data communications, speed is of the essence.

So, how do you overcome this challenge? What can you do to a radio wave to make it work compatibly with other radio waves right next to it, all around it, or even on its very own frequency?

In Part 2 of our series, we’ll explore some of the ways to overcome these issues, and take a look at the history and definitions of the words “wireless” and “radio”.